F**k the doctors. What you need is love

Home / Blog / Uncategorized / F**k the doctors. What you need is love

Spencer is a superb film which deals with a theme which will be familiar to many: someone teetering on the brink of a nervous breakdown. The fact that, in this case, the person is well known the world over – Lady Diana Spencer, putative future Queen of England – makes little difference. The unravelling of a life is taking place before our eyes. 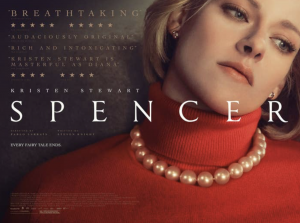 Told over the course of a few supposedly festive days spent at Christmas at Sandringham Palace, Spencer shows us Diana – played, stupendously, by Kristen Stewart – getting lost on her way to the palace, suffering bouts of bulimia, and generally being placed most definitely outside the charmed circle. A biography of Anne Boleyn is left out in Diana’s room, and Diana sees herself in that woman’s shoes – as another who met an unfortunate end at the hands of “the Firm”, albeit in an earlier time. The discordant music, composed by Jonny Greenwood of Radiohead fame – who also did a nice line in dissonance and paranoia in their day – heightens the atmosphere of tension and malice.

The exhaustive lists of foods prepared by the kitchen brigade (“chocolate log, white chocolate log, Christmas pudding”), and the weigh-in and weigh-out – guests are expected to put on at least three pounds as a measure of their appreciation of the Christmas fare – give an indication of how Diana’s bulimia developed. These scenes leave little to the imagination.

Diana has a few friends at court – her favourite lady-in-waiting, played by Sally Hawkins, in a dramatic swerve from her Paddington days, utters the immortal line quoted at the top of this review, and Darren, head of the kitchen brigade, shows her some rare kindness – but is thrown back on her own resources. Her boys are her strength and stay, reporting to each other, in mock military style, on progress. The closing scenes, in which Diana escapes with her sons into the contemporary world, with its American music and buckets of KFC, provide some relief – though driving too fast with the wind blowing in your hair hints at what is to come. Harry has reportedly welcomed the film, as an accurate portrayal of what went on.

Overall, the viewer is given an insight into a peculiarly British institution, all suffocating reserve and hidden ill-will. (Timothy Spall is particularly good as a manipulative royal servant who is pulling the strings throughout, and has a nasty habit of hoving into view when least expected.) No coincidence that the director, Pablo Larraín, is Chilean, and much of the funding is international. Other countries had similarly stuffy monarchies in the past: Britain, almost alone in the world, decided to hold on to all the pomp, and remain stuck in the past, all ermine and tradition. Here, these things are depicted as relics, rather than, as many would have us believe, a font of strength.

While artistic licence may have been used in various places, overall, the piece rings true, as a portrait of a troubled soul pushed to her limits by an uncaring regime. As Diana was reprimanded on coming “down” to the scullery on one occasion (though the line does not appear in the script): “Madam, we know our place, and you should know yours.” 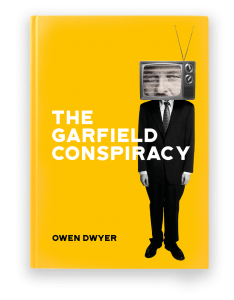 The parallels between Spencer and The Garfield Conspiracy, the new novel by Owen Dwyer, just released by Liberties Press under the Ely’s Arch fiction imprint, are striking. Richard Todd, an outwardly successful novelist, is unable to move on with his new novel. When an attractive young editor, Jenny Lambe, is sent to help spur him into action, the two begin an affair, and Richard’s life starts to unravel. After splitting from his wife, Richard begins to be visited by the ghosts of the people he’s researching, and his own life becomes entwined with those of President James Garfield and his circle – with unexpected consequences.

Among other things, The Garfield Conspiracy reminds us that the past is never wholly dead, and that the challenges we humans face, have a habit of recurring. The story will resonate with many men – and, as Spencer makes clear, plenty of women too – who have had to deal with the challenges of entering the “third age”. In interviews, Owen has touched on the challenges he has faced in this regard, and has urged others who find themselves in a similar situation to get the help they need, in order to move beyond the things that are holding them back. Menopause is at long last receiving the attention it deserves; male midlife crisis, for too long dismissed as a source of comedy, will, we hope, be next in the spotlight.

The Garfield Conspiracy would make a fine film. Like Spencer, generous helpings of paranoia, and the sense of reality fraying at the seams, would be required. White chocolate logs, less so. Perhaps an enterprising director or producer would like to take a punt on an author who, as the Irish Independent put it, is writing “Irish fiction as we’ve rarely seen it”.

Both Spencer and The Garfield Conspiracy come highly recommended. For works that tackle difficult subjects in an unrelenting fashion, they are strangely comforting. There, but for the grace of God, go all of us.

SPENCER is on general release. THE GARFIELD CONSPIRACY by Owen Dwyer, published by Ely’s Arch, an imprint of Liberties Press, is out now.